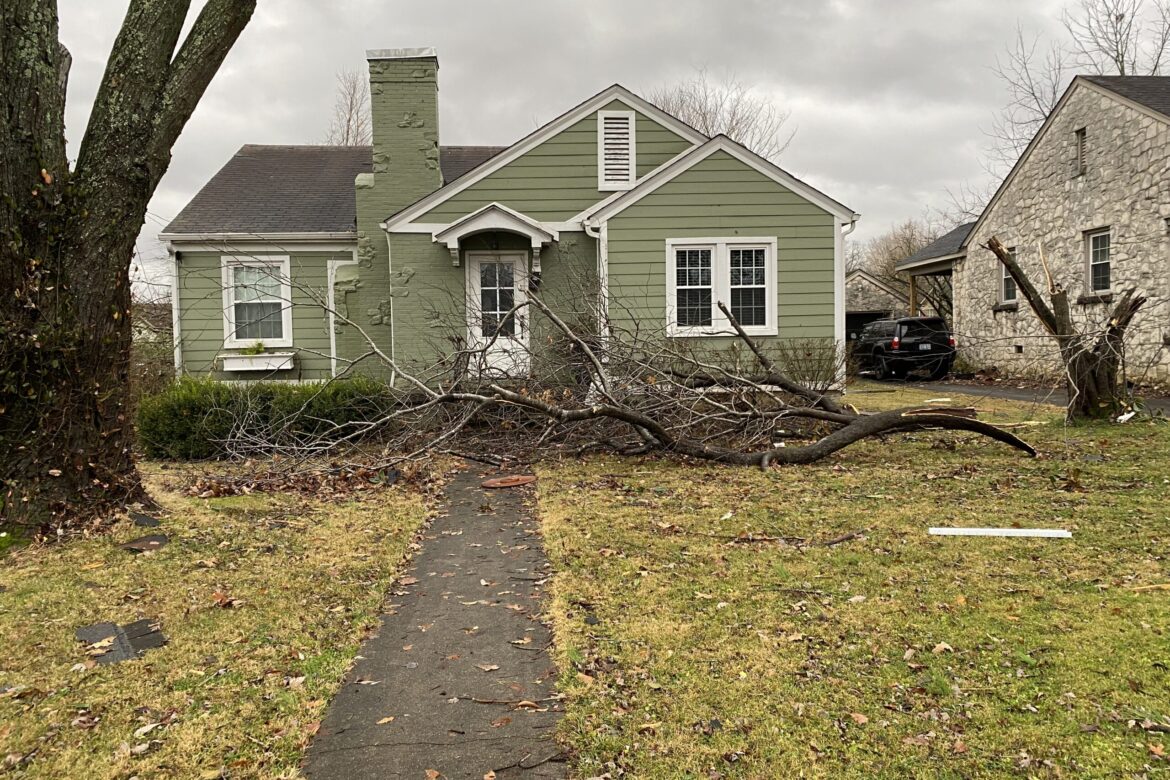 Finding ‘pure joy’ in the midst of chaos

One of the sad realities of any natural disaster or tragedy is that after the first week or two, most people are able to move on from it. Those directly affected, though, continue to live in it every day.

Today marks six months to the day since a tornado struck our home in Bowling Green, Kentucky on December 11, 2021. These have been the hardest six months my wife Emily and I have ever had to endure.

As I sit here on June 11, 2022 — a Saturday, just as December 11 was — it feels natural to reflect on the heartache we’ve endured, the tears we’ve cried, and the despair we’ve felt at times. But it’s also a chance to reflect on the love we’ve seen from family, friends, and colleagues, and the ways in which we’ve been able to grow closer to God in the midst of this difficult season.

One of the first questions that people asked me about that night was if I was scared. The short answer is yes, mainly because I was home alone with just the cats while Emily was in Louisville visiting friends. But I’m always quick to say that I was never fearful. I think you can be scared but not afraid.

I never once feared my life would be in danger because the whole night there was a palpable since that God was protecting me. I’ll spare some of the details from that night here, but you can read my piece in the Washington Post for more play-by-play of what that night was really like.

I didn’t sleep even one minute that night. How could I? There was a gaping hole in my house, rain was pouring in through the ripped ceiling, and my neighborhood and city looked like a war zone.

Since that day, these past six months have been marked by one disappointment and trial after another for Emily and me.

Less than a week after the tornado hit, our insurance adjuster came to the house to assess the damage. As he was leaving, he backed into my car and scraped the side of it. The damage was not bad, and it was easily fixed. I also couldn’t help but laugh at the dichotomy of my car surviving a tornado, but not the insurance adjuster. That incident was a minor headache that was thankfully rectified a few weeks later.

But as the new year rolled around, Emily tested positive for COVID-19. Then, on New Year’s Day, another round of dangerous storms rolled through Bowling Green and the surrounding areas, producing more tornadoes.

Now displaced and living with Emily’s parents, I experienced traumatic flashbacks of December 11 as the storms sirens rang out once again, and once again we had to load the cats in carriers and take shelter.

“Not again,” I said repeatedly as Emily tried to console me. I won’t lie — I was a wreck.

The winter raged on, and two months went by where no work was done on our house. It sat throughout the brutal winter months with no electricity and no heat, with just a tarp keeping the rain, snow, and ice from entering our house.

By the time February rolled around, our impatience growing by the day as there was no indication of when repairs would start, Emily and I considered purchasing or even building a home. Given the timeline of repairs, it seemed like a faster route. It also became increasingly more difficult to drive through our neighborhood and see it in the shape it was in. Beautiful magnolia trees and beautiful homes were gone. What was once an urban forest of beautiful greenery was mostly blocks of chopped up wood and cut-down trees.

As we went through the loan process, we discovered that for years someone else’s credit was being reported on Emily’s. Somehow her social security number got mixed up with someone else’s who is similar, and tons of loans that were not hers appeared on her credit report. Don’t ask me how this happens, because I still haven’t gotten answer. But the result of this is that no bank was able to give us a home loan until this got resolved. Here we are in June, still waiting to hear back from the credit bureaus on the disputes we filed months ago.

Teaching this past semester became a difficult task every day. As the real-life stressors began to mount, while home repairs moved at a snail’s pace, mustering the emotional, physical, and mental energy to teach hundreds of teenagers every day felt nearly impossible. I went home every day, exhausted in every which way, frustrated as hell that all we could do was wait.

The Spring rolled around, and repair work started to tick up — an encouraging sign. I went over to the house one day and couldn’t help but notice the beautiful leaves and flower buds blooming on what was the left of a tree in our front yard that was blown over.

There is still beauty in the ashes.

In April, though, Emily’s Subaru bit the dust. A car we had hoped to drive for many more years just gave out on us, and we had to buy a new one. It’s been almost six weeks now and we’re still waiting on the car we purchased to come in.

In the midst of this, Emily developed shingles — a condition that arises from stress, though it’s most common in elderly folks. For weeks, Emily was in lots of pain. We both had the flu pretty bad just a week or so before the tornado, too, so she’s really been through the ringer with her health these last several months.

Early on in this season, I felt it on my heart to meditate on James 1:2-4: “Consider it pure joy, my brothers and sisters, whenever you face trials of many kinds, because you know that the testing of your faith produces perseverance. Let perseverance finish its work so that you may be mature and complete, not lacking anything.

Waiting is hard. It’s especially difficult when you don’t know when or even if you’re going to get an answer, whether that’s from a credit bureau or from God in prayer. We don’t do well with waiting, and when we’re under stress it’s exacerbated even more.

Isaiah 40:31 says, “But they who wait for the Lord shall renew their strength. They shall mount up with wings like eagles. They shall run and not be weary. They shall walk and not lose faith.“

I wrote these words years ago in another season of waiting, and I think they still apply today:

If you’re struggling with this and you’re finding yourself angry at God because of circumstances in your life or you’re feeling impatient, this is my prayer for you — that you will find contentment in waiting on the Lord. It’s the same prayer I’m praying for myself. Welcome the idea that you don’t need to have every answer. You don’t need to understand everything.

It’s been a really, really hard six months for us. Our physical and mental health have taken a toll. We’ve probably had a short temper with people at times when we might not have otherwise. But it’s just been hard. There’s no other way to say it, really.

SONGS THAT HAVE GOTTEN ME THROUGH THESE LAST SIX MONTHS

But as I reflect on these last six months, though the day of the tornado and the heartache from it are still so fresh, I can’t help but also be grateful. We have so many people who have helped us get through this season.

We truly could not have navigated this time without the help of Emily’s parents, Don and Maura Gerard, who have not only let us and our cats live at our house for six months, but they’ve taken care of us in ways that would take too long to fully explain here. We are forever indebted to them, and I truly don’t know what we would have done in the aftermath of this without them.

We are so thankful to the many people — friends, family, colleagues, and strangers — who showed up at our house the day of and the days after the tornado to help us clean up, bring us food, and offer support. We are also grateful for our church small group and other friends at church who have prayed fervently over us each new development brought more stress in our life. Your prayers have been heard, and we know God is moving.

It has also been amazing to see how far this community has come in rebuilding their homes and their lives. For many people, though it’s been six months, dealing with after effects of the tornado is a daily reality, and will continue to be for some time. That’s certainly the case for Emily and me.

We are still not back in our house yet, and I don’t really know when we will be. But we’ve been seeing progress at the house — the damaged area of the house has been rebuilt, walls have been painted, new flooring has been put down, and just yesterday we drove by to see siding had been fixed and a man was there repainting the outside of the house.

We are so ready to be back in and share our lives together in our home. While we continue to wait on that, we will trust the Lord that His plans are good, that His ways are greater than ours, and that He is faithful to do what He says He will do.

For a while I wasn’t sure if moving back into our house would be the best thing for us. Now I can’t imagine doing anything else. Seeing our newly constructed, newly painted, and refinished house will be reminder that God is always working, always making things new, and is not finished with us yet.

It’s a reminder that there we can find “pure joy,” even in the midst of the chaos.

I would love to connect with you! You can find all of my social media info as well as my podcasts here: https://linktr.ee/ColeClaybourn