One of the hardest parts for me about the COVID-19 shutdown is that there’s no baseball right now. It’s just as hard for the players. This week I got to chat with Jerad Eickhoff, a fellow Evansville native and pitcher for the San Diego Padres, about how he’s handling not being able to play baseball and having to head back to Evansville for the time being.

Jerad played for Philadelphia Phillies for five years before signing with the Padres this offseason, but long before that were close to being college classmates. Jerad signed with Western Kentucky after two years at Olney Central Junior College, but when he got drafted in the 15th round of 2011 Draft by the Texas Rangers, he decided to take the contract and start his professional career. We can’t blame him for that! 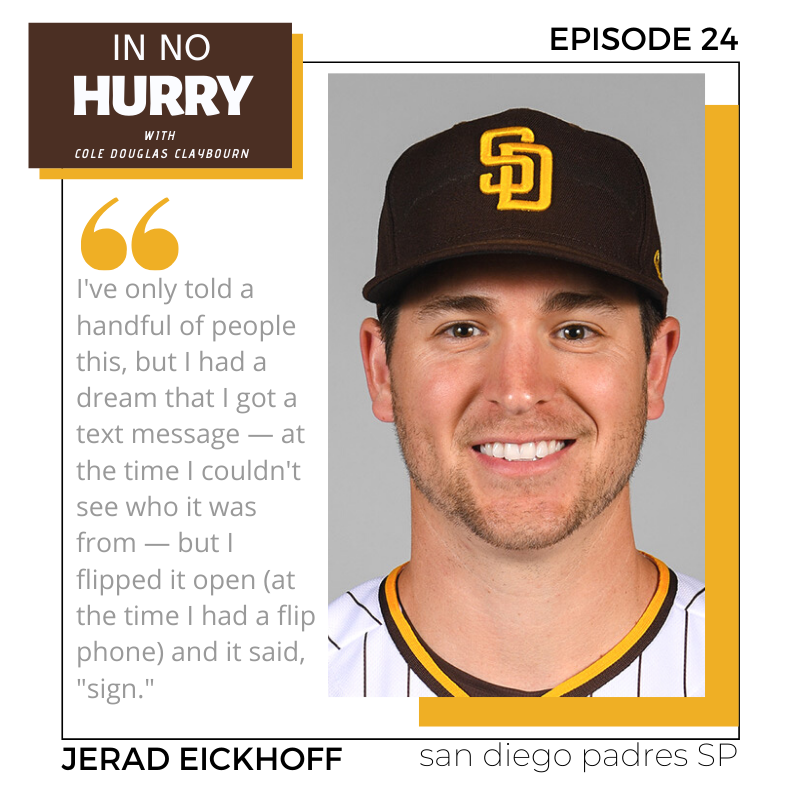 But in all seriousness, Jerad is a great guy and despite his success, he’s incredibly humble and genuine.

He lives in Evansville in the offseason and he’s back there now, so we talked about what he’s been doing to stay sharp physically and mentally, his first impressions of his new team and new teammates, the challenges of cutting Spring Training short with no startup date determined, some of his favorite moments of his career so far, and the best and worst parts about being back in Evansville for the Spring.

He also talked about what it’s like as a player to be traded. This is something I’ve always wanted all the details on and Jerad went pretty in depth about his situation when he was traded as a minor leaguer from the Texas Rangers to the Phillies.

For this episode, we partnered with More Than Baseball, a nonprofit 501(c)(3) aimed at evaluating financial need and raising money to help minor leaguers make it through difficult financial situations.

According to MTB, before the season was suspended, minor league players were set to make between $1,170-$1,650 per month for five months.

MTB wrote in a press release that minor leaguers risk not being able to comply with state or local “shelter-in-place” orders to hold jobs and make money. MTB and MLB, along with several other organizations, worked together to form a plan to provide a guaranteed $400 a week for minor league players through May 31, but MTB estimates at least 4,000 Minor League players are in need of financial assistance.

“Minor league baseball players are subject to poor working conditions and are on the hook for their own housing, equipment, and nutrition. We refuse to allow any ballplayers go to bed hungry and wake up on an air mattress only to play in front of thousands of paying fans per night.”

I talked with Jeremy Wolf, the executive director for More Than Baseball, about what this organization is doing and how we can help, so you’ll hear a short interview with him before the interview with Jerad. They’re doing some great work and I encourage you to donate money to their cause if you can.